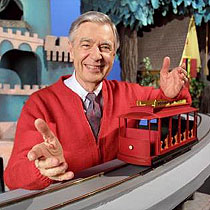 This week’s “This Week” might not just be for our Pittsburgh natives. In fact, even though I’m not a betting man, I’d be willing to bet this one resonates with all of us, everywhere. Fred Rogers and his show Mister Rogers’ Neighborhood was an American staple for over thirty years, and this week marks the 15th anniversary of the show’s series finale. On August 31st, 2001, after a week of episodes dedicated to his love of the arts, Fred Rogers signed off for the last time.

Mister Rogers’ Neighborhood doesn’t need any explanation or over-elaboration. If you’re unfamiliar with the immensely popular children’s show, well…go watch old episodes and come back to this blog later. Rogers’ show was taped in Pittsburgh’s WQED Studios from 1966-2001, after recording three seasons in Toronto at CBC Studios from 1963-1966. The show remained in daily syndication until 2007.

The mild-mannered Rogers’ became so revered, pop culture started to parody his show, he couldn’t keep guests away, and along came false urban legends.

During his time on Saturday Night Live, Eddie Murphy wrote a recurring skit called “Mr. Robinson’s Neighborhood”, a comedic parody of the children’s show. Fellow Pittsburgh native Kurt Angle once teased Rogers’ as a last resort to get hometown fans to boo the Olympic gold medalist at a wrestling event. Bill Nye, Lou Ferrigno, Captain Kangaroo, characters from Sesame Street, and tons of other guests graced Roger’s fictional-but-living world over the years.

As far as urban legends go, sorry sharpshooters. Fred Rogers was never a sniper in the military. While quite the amusing rumor, it’s hard to imagine a vegetarian who refused to put a desk in his office because he felt it created too many barriers harming anyone for any reason. He truly was exactly what he said he was…everyone’s neighbor.

Don’t forget…IAN BUYS HOMES! I am always looking to expand my personal portfolio. If you’d like to meet with me about your property, please submit your inquiry HERE! I look forward to hearing from you!